Reset to standard size
Font size options
Increase or decrease the font size for this website by clicking on the 'A's.

Reset to default contrast
Contrast options
Choose a color combination to give the most comfortable contrast.

Peterborough has been home to several types of libraries, beginning with the Peterborough Social Library, founded sometime in the 1790s. This small collection of books was well used by members, until the volumes were worn out, discarded, or sold in 1830. In 1827, the Rev. Abiel Abbot arrived in Peterborough as the new minister of the newly built Unitarian Church. Abbot took an immediate interest in educational opportunities for the people. He formed a Juvenile Library, a ministerial library, and a shares-based library with annual dues of 0 cents. Elsewhere in town, the Union and Phoenix Cotton Factories hosted libraries for the mill workers. All of these libraries were well appreciated by those who had the privilege to access the collections. Abbot, however, perceived a need for a library open to all and not based on who you knew, how old you were, where you worked, or whether you could afford to access it. On April 9, 1833, at Peterborough’s Town Meeting, a proposal was put forward to create a library to be owned and funded by the people through taxation. It would be open to all and become the first free tax-supported public library in the nation. A committee was formed to oversee the library, consisting of one person from each school district. The town appointed three directors: Dr. Abiel Abbot, Timothy Fox, and John H. Steele. In 1837, a complete library catalog was printed, listing all the books in the public library, sorted by topic. One catalog was printed for each family in town. The books were stored first in the general store, then in the post office, and finally in the Miller Pharmacy located in the ground level of the former Town Hall. By 1890, the library had over 6,000 books and space had become an urgent issue.

In early 1890, a group of citizens had together purchased a piece of land at the corner of Main and Concord Streets. They had quietly prepared a location for a library building, should the funds be raised. In 1891, two former Peterborough residents, Nancy Smith Foster and her cousin William H. Smith, agreed to give $10,000 and $5,000 respectively toward a library building. They stipulated that their cousin George S. Morison, an accomplished engineer, should be the one to design and build the library. Morison agreed and was tasked with creating a durable, low maintenance, and fireproof building. On October 4, 1893, the new Peterborough Town Library building opened to the public. It featured a plain brick design, a large reading room with tables and chairs, a beautiful wooden reference desk, and three floors of steel shelving. At that time, the stacks were not open to the public; instead, a patron would request a book and the librarian would deliver it to the reading room. Meticulous records were kept of the books purchased each year, numbers of books checked out, and names of patrons who used the library. Most of these original records are still in the library archives. Twenty years after the building’s construction, the library trustees, which included George Morison’s sister Mary, added the colonnaded front portico entryway. Stewardship of the Library

The Peterborough Town Library has been well cared for and valued by the town’s residents. Dedicated volunteers and Board members oversaw the library’s growth and expansion through the 20th century. Upon his death in 1940, Eben Jones, an active Board member for 50 years, established a large endowment to fund future construction. These funds were used to construct a new wing of the library in 1957. A meeting room was added, along with a kitchen, a basement hall for civic meetings, and an office for the librarian.

In 1977, Elizabeth Yates McGreal headed up a campaign to contribute to an expanded children’s area. McGreal wrote to women named Elizabeth, both locally and across the country, and asked them to contribute to what would be called “The Elizabeth Room.” The new wing was constructed, allowing the children’s collection to grow and including a small space for  story time. The 1977 addition was open concept, as was popular during the time. A Library for the Future

In 2004, a group of concerned citizens began to plan for further renovation of the library. Construction standards and building codes had changed dramatically over the prior two decades. The library was not ADA compliant and lacked an electrical infrastructure to meet the new demands of the technological age. It had no elevator, an inadequate heating system, and no ventilation. A building study was completed to document the building issues and the cost of a renovation.

The 1833 Society, a nonprofit organization, was founded in 2011, with the mission of creating a library for the future. Library champions stepped forward and, together with the Library Trustees, put in place plans for a historic renovation. Nearly a decade of hard work ensued, and yet again, a private-public partnership raised the funds to create the best library possible for the people.

In 2018, the Town of Peterborough voted overwhelmingly in favor of a $3 million bond to support the renovation. Through the staggering generosity of individuals, businesses, organizations, and foundations, a further $5.5 million was raised. Designed by Ann Beha Architects, the new library restores many aspects of the 1893 building and features expanded room for collections, much-needed small meeting rooms, a classroom, a large community function room, and collaborative spaces for all ages. The renovated library reopened on September 12, 2021. 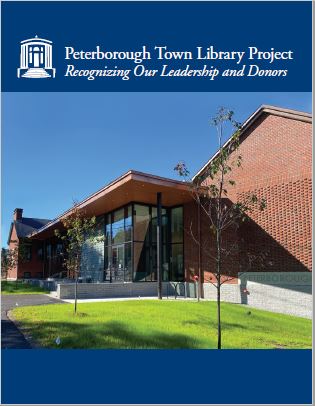 The people of Peterborough have continued to support and prioritize the first free tax-supported public library in the nation. The library remains as both a historic symbol of the town’s belief in free access to information and knowledge, and as a modern library with opportunities for connection and collaboration for years to come.

To read further about the history of our project and our donors, please read our book: The Peterborough Town Library Project: Recognizing our Leadership and Donors